A glorious day in an ever-diminishing special ecosystem: Hiking the Milk River Ridge

AWA has had a long involvement with Southern Alberta’s Milk River Ridge, not least through board member Cliff Wallis’ membership on the Milk River Management Society. So it is always a memorable day when he is able to take us on a tour of this amazing ecosystem. On May 20 he was joined by Cheryl Bradley, another Alberta naturalist with many years of expertise in this grasslands area, as they graciously contributed their expertise to make our “Botany, Birding, and More” exploration of the Milk River Ridge a very special adventure indeed. Chris Saunders and Lindsey Wallis took photos and jointly wrote this story from the field trip. 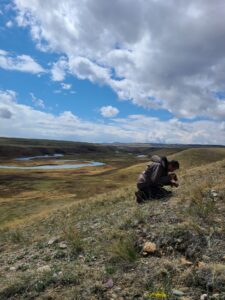 When most of the group left the meeting place in Lethbridge in a severe storm featuring lashing rain and very strong winds, few thought this hike would go ahead. However, Cliff, our self-proclaimed “Sunshine Superman,” assured everyone the weather would change for the better. As the group drove south along Highway 4 the rain continued but after turning west and south on gravel roads it stopped.

Fourteen hikers and a stuffed wolf carried by our youngest naturalist set off to the south-southwest up the ridge from a point about four kilometres from the Taylor ranch house. This is in the eastern portion of the Milk River Ridge. There was no rain but a fierce wind was blowing from the north, making the right clothing essential. It has been a very dry spring in the area and the grassland plants were just beginning their spring growth. Along with the hike leaders Cheryl and Cliff, there were a number of other experienced naturalists in the group. As a result, there were plenty of sightings of plants and wildlife together with extensive discussion. One highlight was an “up close” view of a large porcupine seeking shelter from the wind in a clump of low bushes. A herd of deer were also spotted on a far ridge, silhouetted against the sky.

Lunch was held at an impressive viewpoint at the top of the Ridge, where the snow-covered Sweetgrass Hills in Montana could be seen clearly to the south east. After lunch, on the descent, there was a brief squall of ice pellets driven by a strong wind that drove the hikers back to the trailhead like horses to the barn. Amazingly, this was the only precipitation the group experienced during the hike.

On arriving back to the vehicles, an intrepid few drove further west to the Sandstone Ranch to search for the fuzzy-leaved purple jewels that are the rare hare-footed locoweed. The group combed gravelly slopes above the sinuous river valley and one appeared… and another… and another! A good colony of these threatened plants were found, as well as larkspur, flax and other hardy natives. With the sky clearing, a prairie falcon was seen making trips back and forth to what may have been a nest on the other side of a sandstone outcrop. The same cliffs held two other apparently disused raptor nests, as well as a colony of cliff swallows.

A glorious day in an ever-diminishing ecosystem that is so special in both the micro and macro views. 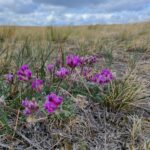 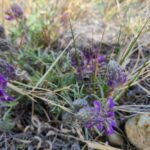 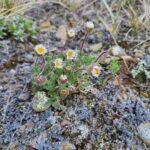 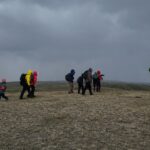 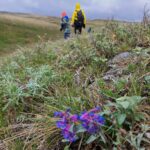 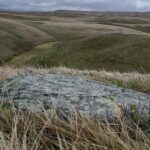 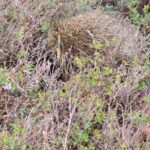 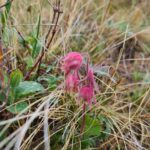 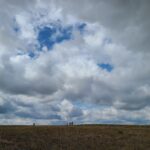 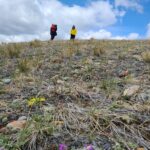 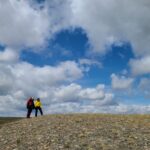 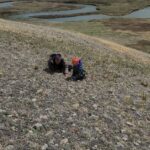 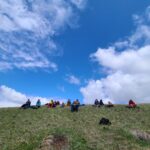 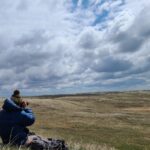 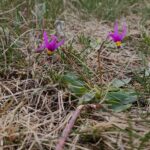 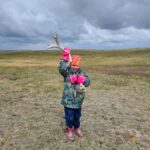 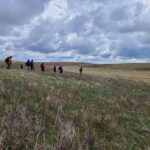 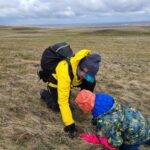 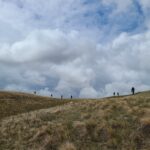 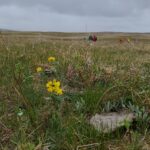