A Paleolontogical Treasure Hunt in our own Back Yard: Discovering Ordovician-Age 450 Million Years Old Fossils in the Tyndall Stone Downtown and Inner- City Calgary

Senior Petroleum Geologist Tako Koning has many passions in life, and it is fair to say that paleontology is one of them. This expert in many things is one of the finest guides one could imagine when it comes to discovering signs of prehistoric life… even embedded into the façade of a neighbourhood Safeway! On June 18 he led a field trip around NW Calgary to explore and showcase the 450-million year old fossils that can be found scattered throughout the inner-city neighbourhoods. Here he talks about how it went: 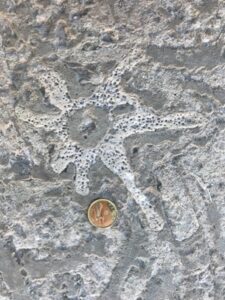 On Saturday afternoon, June 18 we had a nice group of 11 attendees on an AWA field trip to discover Ordovician-age fossils downtown Calgary and two inner-city areas. Why would this group want to spend their afternoon looking at fossils?

There are a number of reasons for this. These fossils are very old and are dated as having been deposited 450 million years ago. The fossils occur in a sedimentary layer called the Tyndall Stone which is quarried near to the village of Tyndall located 30 km northeast of Winnipeg. The fossils lived and died in a shallow-water tropical sea. Tyndall Stone is used as a beautiful decorative stone which clads buildings all over Canada. It is the most famous of Canada’s ornamental building stones. Another reason to go on this field trip is to view over a dozen of different species of fossils which were first living creatures ranging from algae, worms and crustaceans which lived in worm tubes, star fish, gastropods (snails), nautiloids, and an amazing variety of corals ranging from large coral-heads to small solitary rugose corals (“horn corals”), to single chain and double chain corallites. So going on this field trip is an opportunity to learn about biological life which occurred many years ago in a tropical sea unaffected by mankind since we were not part of the scene in the Ordovician.

We first visited two historical buildings downtown which are clad in Tyndall Stone: the AGT building at 119-6 Ave., SW and the Bank of Montreal building on the Steven Avenue Mall. Then we spent an hour viewing ten blocks of Tyndall Stone in front of the Safeway Store in Kensington so we could see the fossils in five dimensions (from the top and from four sides). We then spent another hour at SAIT where Tyndall Stone clads the entire outside of the Senator Patrick Burns Building. I look forward to leading this field trip again next year for the AWA with a nice group of people. 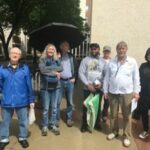 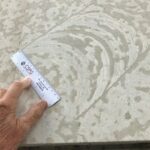 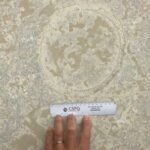 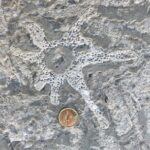 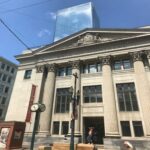