Beaver Dams in the Ghost: Hiking the Headwaters of Meadow Creek

On August 17, Heinz and Kris Unger coordinated an adventure in to the headwaters of Meadow Creek in the Ghost wilderness areas north of Kananaskis. The group was small but the day memorable: 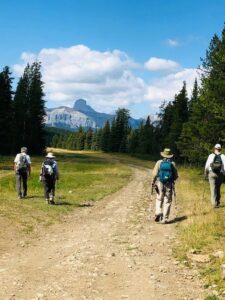 A small group of five started out with fording Waiparous Creek and walked through cool aspen and pine groves, at times along the edge of the escarpment above the deeply cut in meandering Meadow Creek. After about an hour’s walk we caught up level with the creek and crossed the creek on a major bridge, built to keep vehicles out of the creekbed. Some successful bioengineering work could also be observed.

Along the way the damage (deep ruts and water-filled “wallows”) from previous OHV use was clearly obvious. The lower section of the trail / track is now closed to motorized vehicles but for some sections further along, OHV is still allowed. However, we encountered three or four vehicles only, plus one angler on an ATV (he caught several brook trout and one Cutthroat – all released back into the creek).

The highlight of the hike was a series of beaver dams, fairly recently built and beautiful clear ponds in the tall grass. That’s where we had lunch in a shady spot, taking in the views. The high mountains, especially Black Rock and Devils Head, form a beautiful backdrop, seeming quite close and rising almost vertically behind the forested ridges that line the wet meadows of upper Meadow Creek.

The cool breezes, the green meadows, the soft trail and the dark forests, all covered by a wonderful silence enhanced by rustling aspen leaves and gurgling streams rounded off a perfect day in nature. 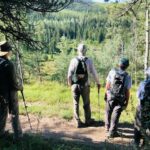 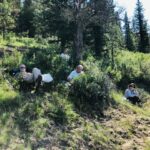 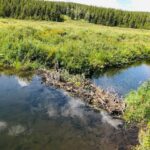 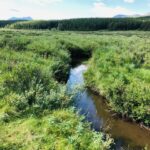 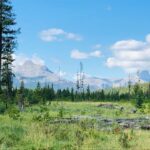 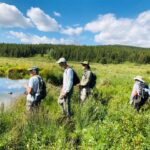 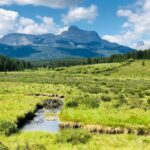