In memory of Margaret Main and Gus Yaki: Hunting for Crocuses on Nose Hill

In springtimes past, former AWA Executive Director Christyann Olson would compete with longtime AWA friend and volunteer Margaret Main to find the first crocus blooms around Calgary. At the same time naturalist Gus Yaki, with his incredible talent for spotting even the most obscure buds or changes in his surroundings, was hunting crocus buds too. Although both Margaret and Gus are ow gone, Christyann continues the tradition by holding an annual Crocus Hunt on Nose Hill as part of our Adventures For Wilderness program. This year they were joined by 14 other participants, including geologist Tako Koning who shares with us how the day went.

Thanks also to Karel Bergmann and Barbara Amos for their photos from the Adventure. 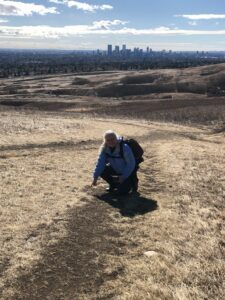 On March 24, 2022, Christyann Olson, AWA’s indefatigable Executive Director led a field trip to Nose Hill Park to hunt for crocuses. The group was a nice size, consisting of 15 attendees. But the purpose was more than just looking for crocuses. Indeed, this field trip was in memory of Margaret Main and Gus Yaki, two of AWA’s dedicated volunteers who have now passed – sadly they are no longer with us. The symbol of spring after a long cold winter – the appearance of crocuses meant so much to Margaret, Gus and Christyann that they traditionally had a friendly competition with the aim to see who could spot that very first crocus. And what better place in Calgary to spot crocuses is Nose Hill Park with its south-facing slopes blessed with invigorating spring sunshine.

As we walked up the slope from the parking lot, Tako Koning, a semi-retired geologist identified some interesting fossils hidden within the boulders marking the pathways. These boulders are likely from a quarry where the Paskapoo Formation sandstone was mined years ago. They have been dated as Tertiary in age, perhaps as old as 30 million years which is young in terms of geological age. The fossils included shells in what looked like oyster beds plus fossilized algae which are sometimes called stromatolites and bits and pieces of fossilized wood.

We then hiked up to a large glacial erratic known as the Nose Hill Erratic. This erratic consists of quartzite which means that it is a very hard, highly compacted sandstone which over the millennia transformed from sandstone into quartzite. Layers of silt and fine sand grains are clearly visible. Some of this erratic is smooth since buffalo rubbed against it when buffalo grazed on Nose Hill. It is part of the Foothills Erratics Train which extends from Jasper eastwards to Hinton and south to the Alberta-Montana border. Ice flowed southwards from Jasper during the last glaciation which occurred only 12,000 years ago. The erratics train originated from large landslides of quartzite on Mount Edith Cavell and other mountains in Jasper National Park. These quartzites have been age dated as Lower Cambrian with an estimated age of 500 million years, equivalent to ½ billion years old. For geologists like me, this adds to the thrill of visiting Nose Hill Park.

Karel Bergmann, a self-trained botanist, has held a lifelong passion for lichens and prairie flowers, and led the search for crocuses. For the first hour, no crocuses were spotted; comments began that perhaps we should have come one week later. We were all just a little disappointed but then just north and uphill from the large glacial erratic: voilà! Karel spotted the first crocus pushing its way out of the soil! The reaction was cheers and clapping of hands. Thereafter another half dozen crocuses were spotted. I somehow sensed that with the attendees there was this subconscious feeling that despite so many changes happening globally including the Covid-19 pandemic and Russia’s sudden horrible invasion of Ukraine, at least the Earth’s environment was still steady and the crocuses were budding as they always do in mid-March on Nose Hill Park.

Will this field trip be repeated again in the spring of 2023? You betcha! You can count on Christyann, Karel and I being there. And hereby we invite you the reader to join us next spring on Nose Hill Park! 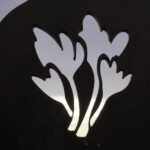 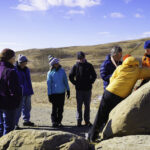 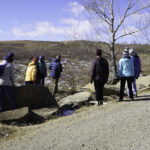 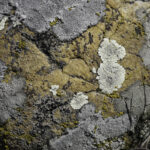 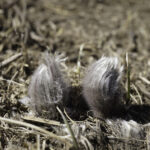 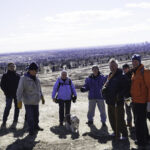 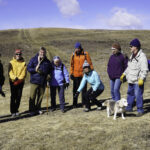 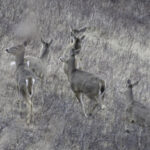 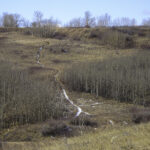 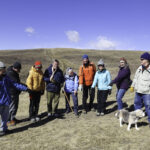 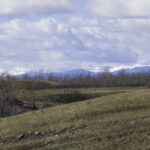 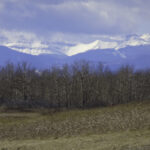 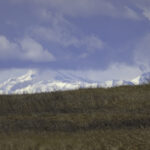 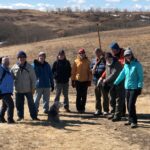