Recapturing the Feel of the Native Prairie: A Fall Ramble on Nose Hill

One of Canada’s — and indeed North America’s — largest urban parks, Calgary’s Nose Hill is an incredible treasure that we are lucky to have. AWA member Wendell Koning went along on our Fall Ramble on Nose Hill Adventure in October 2021 and expresses his appreciation: 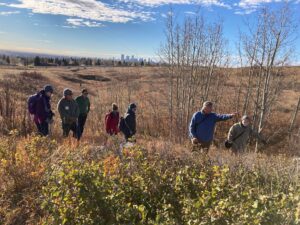 On the morning of October 21st, about 15-20 of us gathered in the early morning sun, to learn more about the botany and geology of Nose Hill Park. The park is found in the northwest part of the city covering 11 sq km. From the top of the hill, on the plateau, one can get awesome views of the downtown to the south; the airport (airplanes coming and going) to the east; and the Rocky Mountains to the west. And in some parts of the park, namely in the many valleys, you can feel what it was like 200 years ago, to be all alone on a native prairie!

Christyann Olson, recently retired Executive Director of AWA, gave a brief overview about the AWA and the history of the park. We had two specialists for this tour, Karel Bergmann, a very experienced botanist, with a wealth of local and international knowledge, and senior geologist Tako Koning, who is passionate about all things geology.

The two specialists worked in tandem – Karel would show us various plant species and how they are adapted to their specific environments, and then we’d stop at rocky outcrops including some massive rocks known as glacial erratics, to learn more about glaciations, rock striations, and the various fossils that could be found (sorry, no dinosaur fossils at Nose Hill, but plenty of other types!).

And at the same rocks or nearby rocks, Karel, an expert on lichens, pointed out the myriad of lichen communities attached to the rocks. Lichens are a life form that we often pass by without noting, even though some display an incredible mix of colours.

The tour ended too soon but I’m sure all participants would agree that we gained new, very entertaining, and super-informative perspectives on this beautiful and pristine urban park.

Thanks to Karel and Tako, and thanks to Christyann Olson and the AWA for organizing! 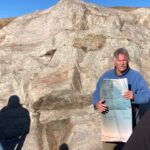 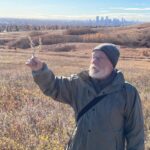 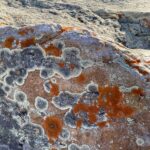 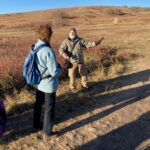 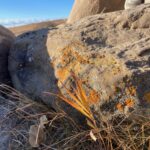 Do you know what citizen science is? Learn all abo

Wow, look at all the events we organized last year

Happy volunteer week all! We couldn't do what we d

Happy Earth Day. A time to reflect on the things w

Want to learn how to build a fire? What do you thi

Heading into the long weekend like... Where are yo

Hey mamas! We all love spending time in Alberta's