On October 3 AWA Executive Director Christyann Olson, and board member and Past President Vivian Pharis, led a walk over Nose Hill in memory of dear friend and naturalist Gus Yaki, who passed away earlier this year. They recount: 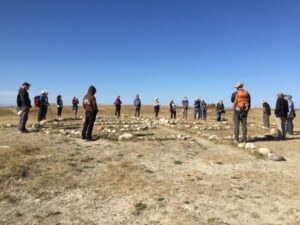 There was a cool wind blowing when we arrived at Nose Hill Park on Friday October 2, 2020. 0ur group was large; 29 folks eager to learn and to remember our dear friend Gus Yaki. Karel Bergmann, Tako Koning and Shawn Cornett helped Vivian and me make a fulsome ramble through some of the features of Calgary and Canada’s largest urban park that covers 11 square km.

We set off with a traditional land acknowledgement, then stopped at one of Gus’s favourite spots to teach about Balsam poplars and Aspen clones. While there Shawn Cornett told the story of community activism and the determination of those who had a vision for Nose Hill – that it needed to be protected as a park. She told of the struggles in earlier years to stave off developers and begin the administrative transformation to the much-used park it is today. She reminded us that not so long ago a request by the Winter Club to expand their parking lot required plenty of resistance to keep it from taking a piece of the park. One thing is certain, without community engagement and people like you being involved, this park remains vulnerable.

Our ramble continued to a string of sandstone boulders and a discussion with Tako Koning explaining the geology of the hill and where he pointed out fossil snails embedded in the boulders. As we moved along Karel and Vivian pointed out plants of interest as we made our way to a quartzite erratic the size of a bulldozer, that is a piece of Mt. Edith Cavell in Jasper. With its corners rubbed smooth by centuries of itchy bison, other parts of this rough erratic are covered with lichens. We scraped litter from under the boulder and added it to our litter bags, as we vowed to keep up Gus’s efforts at leaving no trace.

As we carried on we enjoyed stories about specific plants and debated about how they got where they did, about unusual land formations and boulders and shared dismay over invasive clematis and thistle that seems beyond control. Erosion in the main path needs repairs and we hope the City will do those repairs soon as they seem dangerously deep. Trail braiding and proliferation is an increasing problem all over the park. A north-south pathway led us toward the medicine wheel and through a lovely aspen grove filled with golden and orange leaves and the smell of fall.

As we neared the end of our ramble, we assembled at the Nose Hill Siksikaitsitapi Medicine Wheel where we formed a circle around the wheel to offer our thoughts about Gus and what he meant to us. We offered rose hips and dried cranberries to the spirits on entering the wheel from the east and before exiting to the west. The Blackfoot ceremonial elder who was interviewed years ago about this medicine wheel, spoke about it being a gift to the city and to the people who come to visit. He said, “they will know that somebody from the other side is looking out for them.”

Gus Yaki was remembered with joyful appreciation of the man who truly was a naturalist. 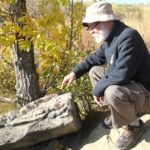 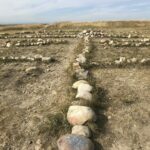 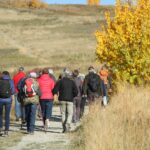 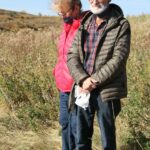 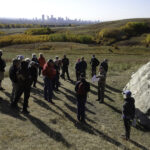 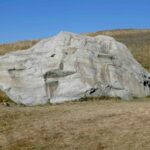 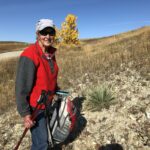 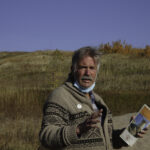 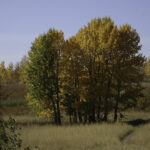 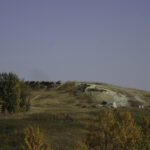 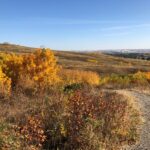 Please join Christyann in an Adventure in memory o

On a sunny and quite warm late winter day, Heinz U

Sitting around the firepit post-skate and crunchin