Rewards Await Those who Persevere the Rain: Plateau Mountain Bike and Hike

The initially-inclement weather made the July 11 trip to Plateau Mountain a true Adventure! However as coordinator Chris Saunders relates, those who stuck with it were well rewarded: 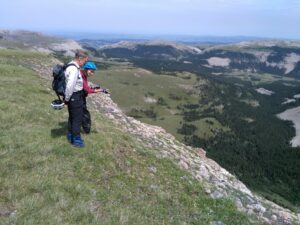 Plateau Mountain is truly a gem in Alberta’s wild spaces inventory. There is a band of bighorn sheep that one can almost always count on seeing and almost always at this time of year, a bounty of alpine flowers in bloom. Today some rough spring weather made the rough road leading to the top of Plateau Mountain a bit of a struggle! However, at the top of the first ridge we walked through a flower meadow – the flowers were past their prime due to the early spring melt but the view was an impressive canyon overlook. The rain became heavier and the risk of serious lightning meant we thought we should shorten our visit to the top of Plateau Mountain, so the group cycled back to the gate and the safety of our cars. With a bit of patience we waited out the storm and the rain stopped and the clouds moved slowly to the south.

Those who had not given up on the day cycled back up the road with me. By the time we reached the top of the highest ridge the skies were blue and there was no evidence of the earlier rain. In cycling south along a road maintained by the oil and gas company that operates the two gas wells on the ridge, we encountered the band of bighorn sheep for whom the flat tundra terrain of the plateau is home. We stopped to see spectacular views off to the south east and south west at end of the ridge; as well as to the east in a middle section.

Cycling north along the ridge we were on an old road which is rapidly being naturalized and reclaimed by the vegetation. Here too the flowers, which at this time of year can be spectacularly beautiful, were past their best. On the return journey along this road we saw, within a few yards of us, a band of about 20 male bighorn sheep of differing ages: a wonderful sight.

The fast bike ride down from the plateau was negotiated safely and we got back to our cars for a safe drive home after a satisfying and physically challenging ride up and hike along Plateau Mountain. 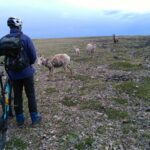 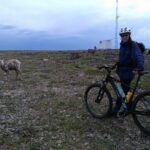 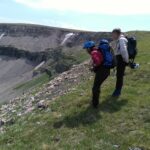 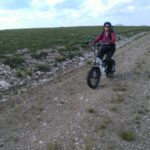 Did you know: The northernmost extent of the Great

How are you beating the heat today? Nothing like c

2022 is the summer of prairie river adventures! We

Where are you adventuring this weekend? Let me kno

Happy #wildflowerwednesday ! It's finally spring i

Tell me about your wild and happy place in the com

Where are you finding adventure this weekend? Tag

How fast is your tent set up? Gorgeous camp spot o

"Don't let the old man in!" has been Jim and Bob's

How is your week going? 🙂 Don't worry, the long