Trivia in the Garden: A war of wits in support of wilderness

Adventure coordinator Sean Nichols talks about hosting a charity trivia event in the AWA garden during the times of Covid: 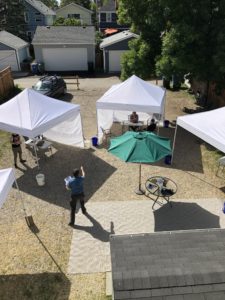 For most of the ten days leading up to AWA’s Trivia for the Wild adventure on August 15, the weather was looking to be pretty miserable. Our otherwise splendid August notwithstanding, the forecast was predicting rain, wind and cool – if not downright chilly – temperatures. With some nervousness, I began trying to decide how to apportion space heaters to the tents so the contestants wouldn’t be freezing, and trying to figure out how to host and emcee a trivia contest, with a computer, while standing out in the rain.

When AWA first began planning the Adventures for Wilderness schedule back in January, and was brainstorming ideas, a charity trivia contest seemed like a great idea. It goes without saying, of course, that AWA strongly advocates getting out into the wilderness and experiencing Alberta’s wondrous natural beauty firsthand. So naturally most of the adventures in the program affirm that philosophy. It’s heartwarming seeing the map of Alberta fill up with adventures taking place, and getting adventurers out into, all corners of the province. But there are of course many Albertans for whom an outdoors and possibly physically demanding adventure, taking up an entire day or more, is not a realistic commitment. Holding a trivia night closer to home, where we could include education and presentations championing the defence of Alberta’s Wilderness, seemed like a great complement. So we quickly added it to the schedule, and as a certified (and certifiable) trivia hound, I quickly volunteered to host.

How much the world has changed since January!

Through much of the spring, and the weeks and months that followed, we put the trivia night on hold, unsure when, or how, to hold it; or indeed whether it would be feasible at all given health concerns and all that 2020 seems determined to throw our way. Until finally we hit on the idea of holding it outside, on the AWA grounds in Hillhurst, with a reduced number of teams granted individualized tents, sitting at a socially-responsible distance from each other.

Trivia for the Wild was re-christened Trivia in the Garden, a Saturday afternoon date was set for mid-August when we hoped the weather would be nice, and it was game on!

Thus with a slightly sinking feeling I kept watching the weather forecast as inclement weather was predicted, wondering if “game on” would turn into “washed out.”

Hurray and huzzah, the day before the tournament gave proof to the wisdom that one should never trust a Calgary weather forecast as the rain held off and we were instead treated to a glorious warm and sunny afternoon. We set up the tents, now to shield the contestants not from the rain but the sun, and I was glad for having many cold drinks on hand to provide the weary warriors.

And true warriors of wisdom they proved to be. As host and question-setter, I knew there might be some true trivia veterans in the field, but possibly also some teams with Wilderness lovers out for a fun afternoon, who might have less “insider experience” with some of the tropes and standards of the trivia circuit. Of course I wanted to ensure that questions were fair for everyone, but also, that all teams would have a fun afternoon, regardless of what place they came in.

I needn’t have worried. With the restrictions in place we indeed had a reduced number of contestants, but the quality of the competition was as strong as ever, across the entire board. Most questions were answered correctly, many by all teams present, and at the end of the day, but a few points separated the teams on the roster.

Indeed it was a team of trivia veterans (team “One Ball Short”) that took home the top cash prize (and more importantly, bragging rights!) but they were chased all the way there by a whip-smart team (team “Trivia Challenged”) that, though less-experienced, came within a question or two of winning. They themselves were not far ahead of the bronze place winners (team “Sweet Wild O’ Mine”).

And of course it was not all hard work! We made sure that it would be a fun afternoon for everyone, and even teams that did not come out on top went home with prizes including AWA-branded bandanas (useful as face masks!) and home-made jam, for best wrong answers:

Question: What do the initials “TCBY” stand for in the name of the chain of dessert restaurants?
Answer: “Thanks. Come back, You.”

When it was all over, everyone went home with smiles on their faces and a greater appreciation for Alberta’s Wilderness, having had a fun afternoon. What more could we ask for in these strange times? 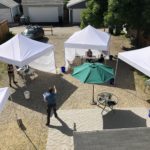 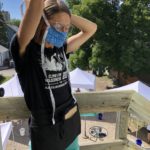 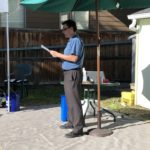 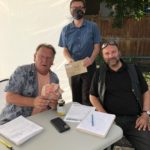 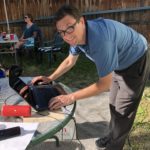 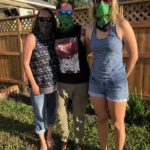