Then and now: Change and continuity in Banff’s Cascade Valley

Despite a grim weather forecast, a group of intrepid adventurers spent the day with author Kevin Van Tighem, who recounted stories from his past adventures up the Cascade Valley and how things have changed over the past half-century. Devon Earl, AWA Conservation Specialist shares the day’s discoveries: 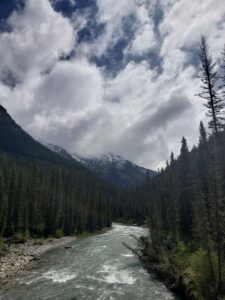 On the rainy morning of June 24th, 2022, a group of 11 adventurers and myself met in Banff National Park to hike the Cascade Fire Road with Kevin Van Tighem. Although the weather forecast was bleak, that didn’t stop this adventurous group from setting out on a 13 kilometer hike through bear country to explore and discuss the changing wilderness in Banff.

As we set off on our hike, the rain let up and we spent most of the day in cloudy conditions with breaks where the sun shone through the clouds. We made many stops along the way to identify bird calls, look at carnivore tracks and scat, and listen to Kevin’s stories about his early experiences in the area. Although there was evidence of a lot of bear activity in the area, we felt safe and secure in such a large group, with many hikers prepared with bear spray at their hips.

As we stopped for lunch next to the Cascade River, Kevin pulled out detailed journals that he had written in the ‘70s detailing his early adventures in the park. As we ate, he told stories of animals he encountered on his journeys, including hearing the howling of a wolf pack as he tried to sleep in a tent at night. It was fascinating to hear of these amazing encounters which happened not far from where we sat at that very moment.

On our return trek we were left to consider the amazing natural history of this area, and how humans and all our activities have changed the wilderness. We were also able to consider what has stayed the same, such as how getting out in the wilderness makes us feel connected to nature and all the beings that call this wilderness home. 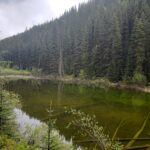 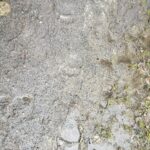 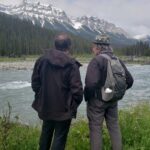 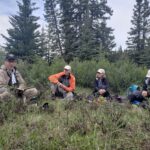 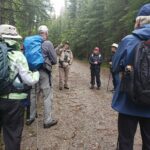 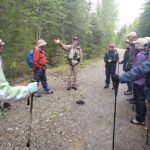