For the second year, AWA was thrilled to be able to offer a special treat: an exclusive audience with Dr. François Therrien, Curator of Dinosaur Palaeoecology at the Royal Tyrrell Museum; followed by a hike to explore the bonebeds at Dry Island Buffalo Jump Provincial Park. This year’s outing on July 16 and 17 was coordinated as a joint endeavour by Christyann Olson; along with Rob and Tjarda Barratt, who recount: 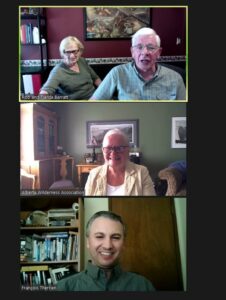 Dinosaurs and Badlands (take 2!), was another very informative and enjoyable Dinosaurs and Badlands Adventure this year that we coordinated with Christyann Olson. On the evening of July 16th Dr. François Therrien, Curator of Dinosaur Palaeoecology at the Royal Tyrrell Museum, delivered an excellent presentation via Zoom on Alberta’s wealth of dinosaur fossils with emphasis on the Albertosaurus bonebed in Dry Island Buffalo Jump Provincial Park. The next day Rob led us on a hike to the bonebed.

François’ presentation on the abundance and diversity of dinosaur fossils found in Alberta was captivating. Alberta is among the top five places in the world for dinosaur fossils. François explained that a combination of two conditions are required for dinosaur fossils to be found: first, rocks must be of the right type and age that formed when dinosaurs were alive, and second, these rocks must be exposed at the surface. Alberta has the perfect combination of both, and that is why it is so rich in dinosaur fossils. François described the many important dinosaur discoveries made in Alberta over the past 120 years, with emphasis on the Albertosaurus bonebed originally discovered in 1910. The full significance of the discovery only came to light after Dr. Philip Currie, then of the Royal Tyrrell Museum, resumed excavations in 1997. The diorama at the entrance of the Royal Tyrrell Museum is based on the fossil record from the Albertosaurus bonebed.

Under cloudy and smoky skies, we met at the upper viewpoint of Dry Island Buffalo Jump Park with its glorious views down the Red Deer River valley. Christyann, Rob and Tjarda explained the significance of the park and need for conservation of its fragile lands, it’s diversity of plants, birdlife, butterflies, native treasures and paleontological sites.

As we walked and scrambled down fascinating badlands, crossing millions of years of geological history, we tried to imagine the lush subtropical forests and flood plains that existed during the age of dinosaurs 70 million years ago. At the bonebed, where we stopped for lunch, we posed for a photograph at the exact location of a photo taken 111 years ago by Barnum Brown’s expedition in 1910. It was with the aid of this old photo that Dr. Philip Currie located the original quarry in 1996. While most of the fossils have now been excavated and removed, there are still scattered fossilized bone and wood fragments to make a visit to this site well worthwhile.

We ended the hike with a scramble through dense bush. Then we refreshed ourselves with sweet juicy watermelon at the picnic site near the river’s edge and took time to look at old photos while talking about the day’s Adventure. We made some great new friends that day and the success of the day’s hike was evident in all the happy faces!