Flowers and Strawberries in the sub-Alpine: A Hike to Tryst Lake in late Flower Season

After a few weather-related reschedulings, we were happy to finally be able to hold our long-awaited hike to Tryst Lake in the Kananaskis sub-alpine. Despite concerns that the flowers might no longer be in bloom, it turned out to be the perfect day with the year’s earlier moisture leading to an elongated season. Coordinator Chris Saunders writes about this great outing: 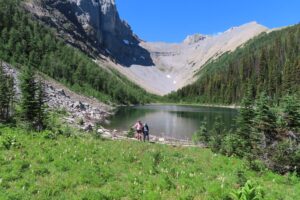 Weather conditions were perfect when 7 hikers met at the trailhead just off the Mount Shark road. From the start the group walked south along an old logging road, which is on a shoulder of the main Spray River valley, for 1.9 kilometres. There were lots of flowers and miniscule strawberries growing along the side of the trail. The group than took small trail to the west which follows a very attractive stream which is the outlet from Tryst Lake high above the main valley.

The lower part of the trail, with its damp conditions, supports many moisture-dependent species including some impressive cow parsnip and patches of bilberry. Further up the trail there is substantial avalanche damage which has destroyed the spruce trees and allowed willows to flourish. In the long narrow valley leading up to the lake there were carpets of flowers, mainly paintbrush in a variety of different colours, aster and arnica.

On reaching the lake, there was just enough clear dry land for the group to walk around the margin of the lake to the west end in order to have lunch in the boulder fields. A resident hoary marmot visited briefly. Lunch was brief because after a few minutes numerous insects descended on the group. It was always necessary to keep moving to void them. The vegetated area at the west end of the lake contained numerous flowers including forgetmenot, valerian, fleabane and many chalice flowers.

The second half of the hike involved returning to the east end of the lake and climbing a steep larch-covered ridge on the south side of the lake. From here the views to the south and east were stunning.

The route returned the group back the same way to complete a very pleasant day. 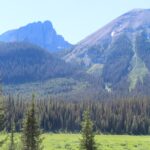 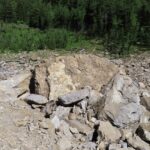 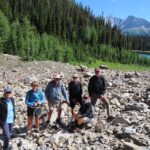 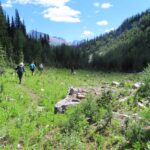 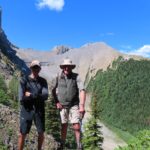 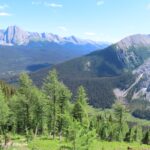 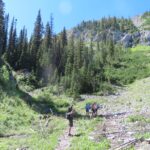